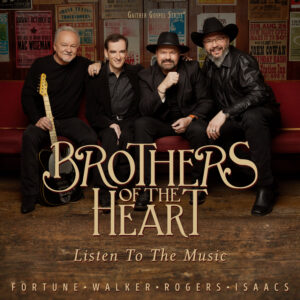 “I feel like it starts with doing your best to honor the music’s roots,” Isaacs says. “There are little signature licks, and I felt like it was important to not change an arrangement so much that you confuse people. So much of this type of record is about recognizability, so you want to do everything that you can to put your stamp on it but to also honor the originals.”

The Brothers will celebrate their new record with a performance on the Grand Ole Opry on Tuesday, February 7.

Listen to the Music’s debut track, the group’s reimagining of The Statler Brothers’ “I’ll Go to My Grave Loving You,” above.

Following Brothers of the Heart’s debut album Brotherly Love, with more than 31 million streams worldwide, the “Listen to the Music” record will be accompanied by a performance DVD and TV special. Filmed at the Opry’s iconic Studio A and hosted by The Statler Brothers’ Don Reid, the TV special will debut on Thursday, January 19, at 6:30PM EST on RFD-TV with an additional airing on Saturday, January 21, at 6:00PM EST.

The special will air on UPtv on Sunday, January 29th, at 9:00 AM and will be seen on PBS, TBN, Heartland, GaitherTV, FamilyNet, CTN, GMTN, Guardian, Liberty, TCT and TLN.
“For me, this is so much more than music,” says Walker. “When you hear people talk about this group they say, ‘You can tell that you all love each other, and you can tell you all are having fun.’ That’s the best thing about it to me. That’s so much of the appeal of the group. It’s not just songs, the music, the harmonies and all that, but the love between us and our love for people. I’m so thankful to be a part of this.”